Historically, numismatic researchers such as Rulau, Brunk, and others have attributed the VOTE THE LAND / FREE token to the Free Soil Party, which was a political movement that believed in the precondition that all new states admitted into the Union should be entirely free, and that slavery would not be allowed within the “soil” of each new state.

David Bowers, however, pursued research into these counterstamped coins, and has shed doubt as to this accepted theory of the stamps. Rather, Bowers proposes that the National Reform Association, a political movement involved in the 1844 presidential election, was the genesis of these curious tokens.

Given the era, and the various political movements of the time, Bowers theorizes that the National Reform Association was a better candidate as the source for the tokens, as the counterstamp better fits the slogans used by this movement. Bowers further hypothesizes that the counterstamp coins were probably struck in the springtime of 1844, shortly after the convening of the Association’s March conference. 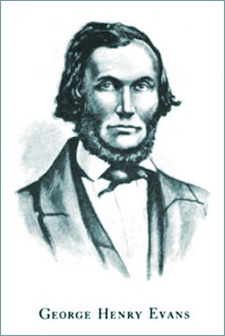 In 1844 George Henry Evans, a radical activist, established the National Reform Association. Formed in New York City, Evans and other activists focused their organization on labor movements and land reform.

In Evan’s view, capitalist speculators had acquired most of the desirable frontier lands in the expanding western United States, and resultantly, had left very little for the average citizen to acquire.

Upset with the belief that there was a growing disparity between the wealthy and the average working American, Evans and other activists sought to reignite old Jeffersonian ideas of self-sufficiency and self-determination through agrarianism.

Society, they reckoned, would be better if farm ownership was made more easily attainable to the average American.

To that effort, Evans printed numerous newspapers and pamphlets devoted to the organization’s causes.

Titles of his periodicals included “Working Man’s Advocate,” “The Radical,” “The People’s Rights,” and “Young America!” All were quite controversial for their time.

By mid-1844 the popularity of the Evans’ efforts waned. Despite the organization’s efforts, the United States never transitioned back to the utopian agrarian society that Evans’ envisioned.

That said, Evans’ efforts were not in vain. Whereby when Evans began his crusade, he had only the support of a few New York friends and a handful of city newspapers. But by 1850, the number of newspapers in the U.S. had grown to over 2,000, and as many as one-third had grown to support aspects of Evans’ land reform movement.

In 1862, a homestead law was enacted by Congress. It enabled all citizens, either the head of a family or twenty-one years of age, the ability to acquire a tract of federal public land.

As a condition for acquiring title, the tract could be no more than 160 acres. Homesteaders were required to settle and live on the land for a period of no less than 14 months.

Given the era, and the various political movements of the time, Bowers theorizes that the National Reform Association is a better candidate as the source for the tokens, as the counterstamp better fits the slogans used by this movement. Bowers further hypothesizes that the counterstamps were probably struck in the springtime of 1844, shortly after the convening of the Association’s March conference.

In conducting his research, Bowers assembled a census of known and listed VOTE THE LAND / FREE tokens. The outcome of his census is the illustrated in the following: 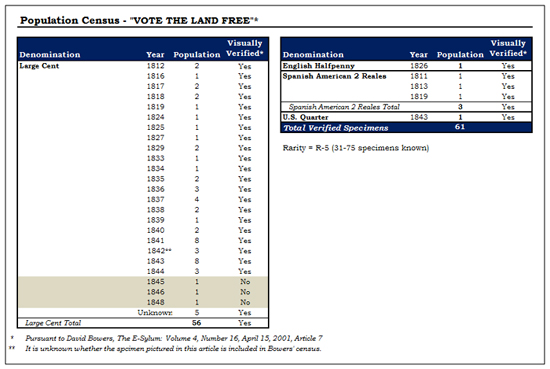 After compiling the census, Bowers contacted Rulau and Brunk. He discovered that neither Brunk or Rulau had actually seen first hand, or photographs of, any post-1844 specimens.

Yet the Free Soil Party movement was active in the 1848 and 1852 presidential elections. If indeed the tokens had been struck for this movement rather than Evans’, many more coins dated 1845 and later would be encountered, and thus included in the census. But they aren’t.

Given the census and distribution of known and verified specimens, I’m inclined to agree with Bower’s theory. Pursuant to the waning popularity of Evans’ campaign in 1844, it is clear why the highest population of specimens are dated 1844 and earlier.

Bowers finally speculates that if indeed there are specimens which exist that are dated later than 1844, they were struck casually, and are not pursuant to the National Reform Association’s efforts. I’m also inclined to agree. 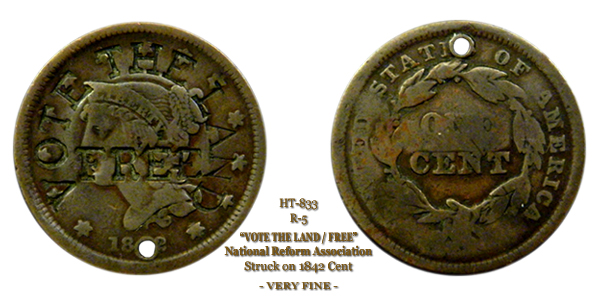 Above is a VOTE THE LAND / FREE counterstamped large cent. The specimen is catalogued as HT-833, and its counterstamp grade is at least Very Fine. It’s listed with a Rarity Rating of R-5.

It should be noted that the VOTE THE LAND / FREE token is a very popular and sought token. Because of this demand, unscrupulous counterfeiters have reproduced these tokens as a means to profit from their popularity.

Normal procedure when examining a counterstamped specimen is to verify that indeed it is genuine. The following animation compares this specimen to an authentically verified token. By carefully comparing the placement, alignment, rotation, typeface, and lettering size of both counterstamps, one can determine a specimen’s genuineness. (The original devices of the token play little role in the comparison.)

Clearly the sample and control specimen agree, and thus the specimen is genuine. 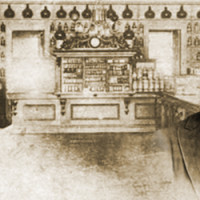 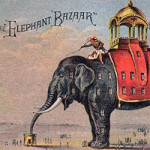